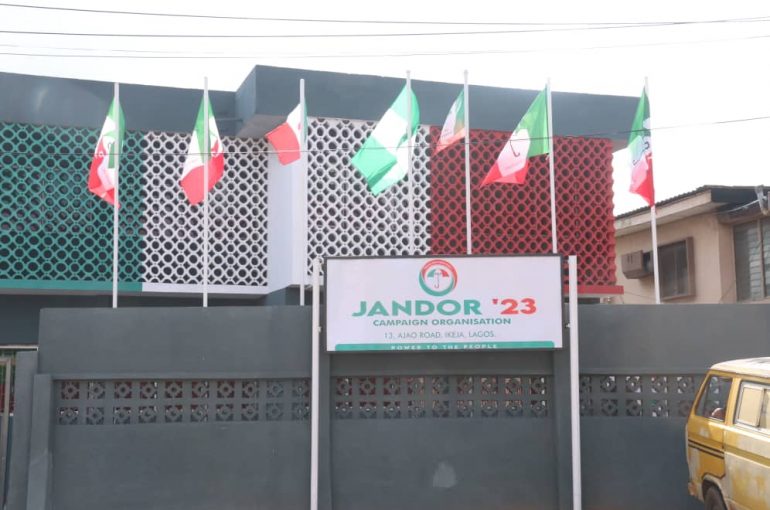 The flag bearer and Governorship Candidate of the Peoples Democratic Party in Lagos State, Dr. Abdul-Azeez Olajide Adediran (JANDOR) has cleared the air on an announcement of a purported official opening of a new party state secretariat and the attendant reactions from some party members.

JANDOR stated that he acted promptly when the information got to him that a parallel party secretariat has been secured by some party stalwarts who have reservations with the conduct of the State congress which produce the current Hon. Philip Aivolji led State Executive Committee. He met with the National leader of the party Chief Olabode George who graciously and magnanimously appealed to the aggrieved leaders and directed that the already secured property be converted to a campaign office Annex for the party’s Governorship Candidate.

This directive has been confirmed to have been carried out and the property is branded JANDOR ’23 Campaign Office in preparation for its official opening later today.

To show his support and regard for the Hon. Philip Aivoji led state Exco, a day after receiving his Certificate of Return, JANDOR paid an official visit to the party secretariat at 132B, Agege Motor Road, Ikeja and he was received by the State CWC. Also, he recently held a meeting with House of Assembly Candidates at the secretariat in Agege Motor road.

It is imperative to reiterate that JANDOR will not do anything to undermine the leadership of the party or promote disaffection among the party members. He has left no one in doubt of his commitment to reunite all interests and tendencies in the party.

As part of his efforts to ensure that Lagos PDP forges a common front to prosecute the 2023 elections, JANDOR has reached out to all his co-contestants for the party gubernatorial ticket, he has extended hands of fellowship to aspirants who did not emerge, he has set up a state-wide reconciliation committee to rally all warring groups across the 20 Local Governments and get their buy-in into our joint project of winning Lagos state for PDP in 2023.

He appealed to all party members to give peace a chance and eschew all actions that could tarnish the image of any party leader or cast aspersions on the Lagos PDP Brand.